Prop weapons include but are not limited to: guns (non-firing, rubber and toy), knives, swords, daggers, spears, bows and arrows, cross bows, slingshots, nooses, hand cuffs, shackles, restraints, and any other implements fashioned or used in a threatening manner, whether capable of inflicting actual bodily harm or not.

Some types of non-violent physical activity also carry increased risk. Student productions planning to involve any type of heightened physical activity such as acrobatics, stuntwork, pratfalls, etc. should contact Undergraduate Production as early in the process as possible, and must receive permission from Undergraduate Production before including these in their rehearsals or performances. 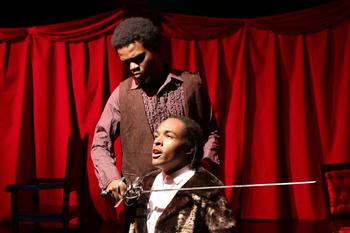 The following list of items, props, and staged action is prohibited: 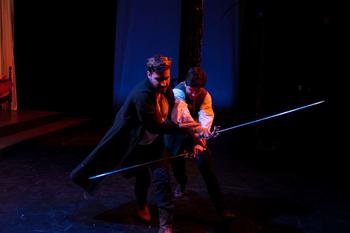 No use of prop weapon or staged combat of any kind is allowed, in rehearsal or performance, without the express written permission of Undergraduate Production. Requests for the use of stage combat must be submitted to UP by the CPA deadline at the beginning of the semester in which the production will occur. Requests for the use of prop weapons must be made at least 6 weeks prior to the first performance date.  Both requests should be made using the UP Prop Weapon & Stage Combat Request webform. UP will determine whether a proposed stage combat, if approved, may be staged by the students in consultation with UP, or if the services of a professional fight director are required. In all cases, no consultant may be hired without the approval of UP. All fights involving weapon-to-weapon contact will require oversight by a professional fight director.  For productions requiring oversight by a professional fight director, UP and the fight director will determine the level of supervision required for fight rehearsals. Yale Police will be notified about any approved uses of prop weapons in undergraduate productions.

The rental, borrowing, or purchase of prop weapons from any source other than UP must be arranged in consultation with UP. 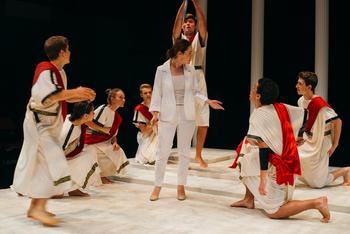 Arrangement for the use and secure storage of prop weapons in the OBT must be made with Justin DeLand (justin.deland@yale.edu).

Arrangement for the use and secure storage of prop weapons in the Theater and Performance Studies theater must be made with Tom Delgado (thomas.delgado@yale.edu).

Arrangement for the use and secure storage of prop weapons in Dramat productions must be made the UP Technical Director supervising the production. In all instances the stage manager must retain sole responsibility for the secure care and custody of any weapons in use.

Arrangement for the use and secure storage of prop weapons in residential college theaters must be made with Undergraduate Production and with the Head of College’s Office of the governing college.

Arrangement for the use and secure storage of prop weapons in other campus venues must be made with Undergraduate Production and with the manager of the venue (e.g., the Afro-American Cultural Center, Mary R. Harkness Auditorium).

“The University specifically prohibits the possession of weapons by any faculty or staff member, student, or visitor while on or in the vicinity of University-owned or controlled property, whether or not the owner is licensed to carry such weapon. This ban includes keeping a weapon or transporting it to another location… Weapons may include, but are not limited to, guns, ammunition, knives, explosives and the like, crossbows, swords, or similar items with the potential to inflict physical harm. Included are disarmed weapons and simulated weapons which could reasonably cause apprehension. Possession of unlicensed or illegal weapons at any location may be grounds for discipline. Appropriate disciplinary action, up to and including termination or expulsion in the case of a student, and/or criminal proceedings will be taken against persons who violate this policy.”

Protocols for the use of prop weapons in stage productions are found on this page, in the Undergraduate Production Prop Weapon and Stage Combat Policy.